How to Safely Transport a Computer

Many people underestimate just how fragile their PC’s are. Not only is a PC very fragile, they also tend to be bulky and expensive too. Whether you are moving to a new house or are lending your computer to a friend, it’s crucial that when your transport your PC you do so safely. Below we discuss a few tips to follow when traveling with your computer.

The way in which you wrap and box up your computer will ultimately determine how safe it will stay during travel. Use bubble wrap, cloth, and anything else you can to adequately pad every corner and protect every button and outlet. Lightly stack a few lightweight pieces in each box and be sure to not stack anything else heavy on top of them during transport. Keep wires neatly wrapped and individually labeled for easy reinstallation.

When it comes to transporting a bulky PC the biggest priority should be preparation. By backing up the hard drive and safely packing away all of its pieces you are much less likely to face a costly accident with your beloved computer. If disaster strikes your computer physically or internally during your move, you can trust the experts at National Computer Repair to get the job done quickly and affordably. 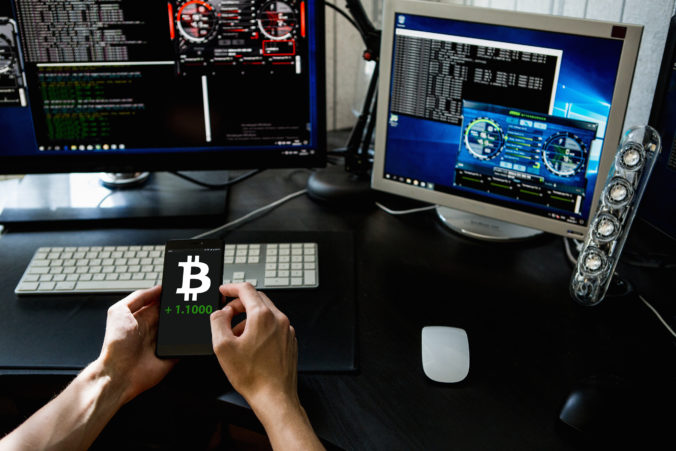 Bitcoins are all over the media, yet even with this ubiquity, few people understand what a bitcoin actually is. A bitcoin is monetary currency, more specifically a type of cryptocurrency. A cryptocurrency denotes a type of money that is completely digital or virtual.

To understand this, you need a short briefing on how currency works. In America a dollar has value because it’s backed by a commodity or something that people agree has value. Similarly, people are willing to trade goods, services, traditional currency and more for bitcoins.

There is no actual physical currency, which is why it is a harder concept to grasp. However, all transactions are kept in a public ledger known as a blockchain. Each bitcoin is represented by its own computer code or file.

Some people believe the public ledger that tracks all bitcoin transactions makes bitcoins a more secure form of currency because their use is completely public and transparent. This interesting feature does make it much harder to create counterfeit bitcoins and one of the reasons many people are beginning to use bitcoin currency.  Another benefit to bitcoin currency is that it is not backed by a single government. This decentralized form of money theoretically makes it easier for transactions to flow between individuals all over the world.

Is it possible to steal bitcoins?

In a word, yes. Just like any currency, theft is possible. While the threat of counterfeit is low, some individuals have unfortunately had their bitcoin codes stolen through cyber theft. This could involve hacking a website or app that stores your bitcoins.

Can I lose my bitcoins?

Of course, there’s also human error. Have you ever lost your wallet by leaving it at a restaurant, amusement park or other place? Well, if you accidentally delete your digital wallet and don’t have a backup of the information somewhere, your bitcoins are lost. It’s a different form of losing your “wallet” but the results are the same.

Bitcoins fluctuate in value just like any currency. Many people are investing in them in much the same way people invest in gold, oil or other valuable entities. Would you like to buy bitcoins? If so come down to National Computer Repair’s brick and mortar location and purchase your own bitcoins today!

Everyone has at least one computer in their home. Whether it’s a desktop or a laptop, chances are you use the computer pretty regularly; so if it breaks down on you, anxiety and frustration can flood through your veins pretty quickly. However, there’s no reason to fret! Simply read this blog for some helpful tips in choosing where to take your best piece of technology in for repairs.

While looking at reviews online can be great for finding a really good restaurant, it can be more beneficial to get referrals from people you trust when it comes to your computer. If they had a really good experience somewhere, they’ll share with you the exact person you should go to. When you’re trusting your computer to a repair shop, getting that referral can make all the difference in getting a working computer back or needing to look elsewhere.

Bad computer technician trying to make repairs with a drill.

If you went to a computer repair shop before and they did a poor job in helping you fix the problem, then don’t go back. If a referral says that they’ve changed consider going back, otherwise, don’t take the chance and keep looking for another location. Going back to a place that has burned you before simply doesn’t make any sense when you’re looking to save your computer. 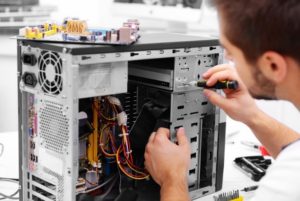 Question Your Own Assumptions

When you’re considering where to take your computer in for repairs, it’s important to question all of your assumptions. Does Geek Squad charge more than the local mom and pop shop? Perhaps it’s the other way around. What about if you avoid the big stores simply because they’re big? All of these are things you need to question and see if they hold up to your own research.

Whatever the reason behind looking for a computer repair shop may be, these are some very important things to keep in mind before you make your choice. Ask questions, see if there are any referrals for the shop, and don’t go back to a place that’s burned you before. When you’re in need of a reliable and affordable computer repair shop, come in to see us and we guarantee to do our best to get your computer fixed.