When we look back in history, it’s amazing to see how far we have advanced in terms of technology and innovation. We have gone from clunky and heavy early laptop bricks to slim and sleek laptops that you can take anywhere. We even have nearly the same capabilities in our tablets and phones. So what were the first truly portable laptops and how have they influenced us today? Continue reading to learn more about the very start of laptop innovation.

Widely considered as the very first portable laptop, the Osborne 1 was created in 1981 by Adam Osborne. It had a 5-inch screen, 2 floppy drives, a battery pack, a modem, and a built-in keyboard. At the time, it costed around $1,795 and unfortunately, it also wasn’t very popular. It was also heavy and bulky. Although it wasn’t successful, it demonstrated the potential of carrying around your own laptop to work or for traveling.

Made in 1982, the Grid Compass 1101 introduced the clamshell design which allowed its screen to fold against the keyboard when closed. This design allowed a safer travel and an easier carry because it was protected. It featured a 384 kilobyte bubble memory and a 320 by 200 pixel electroluminescent display (ELD). Costing around $8,000 to $10,000, it was mainly used by the military and was also used by NASA on the space shuttle during the 1980s.

Its innovative clamshell design was one of the most influential and successful aspects of it that is still seen in many of our modern devices today. However, it wasn’t truly portable due to the lack of an internal battery and it had to be plugged into an outlet.

In 1989, the Compact LTE was regarded as the first “notebook” laptop due to its smaller size similar to a notebook. It was much easier to carry around compared to the larger and bulkier laptops before its time. It had a built-in hard drive and about 20MB of storage space.

Apple created their first laptop in 1989 called the Macintosh Portable and it featured a decent battery life and screen for its time. However, its size and heavy weight did not add to its popularity. Although it did pioneer in including a built in trackball.

Moving forward to 1991, Apple released the PowerBook series which were extremely successful in their design and features. The keyboard was moved back so users can rest their palms and it also featured a track ball positioned towards the front. This is now equivalent to the touchpads we see now on modern laptops. Apple continued to further innovate the PowerBook series and its features set the foundation for more technological development that we are able to use today.

As you can see, we have definitely come a long way from our humble technological beginnings to high-speed devices that has connected the world. While we don’t do repairs on laptops from the late 1900s, we do provide expert repair services for modern laptops! National Computer Repair is your one stop tech support for virus removal, upgrades, data transfers, and much more. For more information, please visit our website or call (615) 826-7550.

While the age of paper thin and hyper speed computers are upon us, many still question whether a desktop or laptop computer would best suit them. Both types of computers have their benefits and their downfalls, but they all grant the gift of infinite possibilities and resources.

It’s entirely possible to find incredibly high performance computers that can accomplish everything you need in both laptop and desktop form. Though for the sake of comparison, a laptop equipped with comparable features and components to those of a desktop computer will not perform as well. This is due to the fact that laptop parts are made smaller and lighter for mobility purposes, sacrificing some speed and performance.

Price is arguably the biggest factor most people consider before purchasing a new computer and those who haven’t shopped around recently may be surprised to see just how far their money can go. Even though desktop computers tend to have better rates of performance than laptops do, they often cost much less. A laptop computer with similar parts as a desktop computer can cost as much as fifty percent more.

Though this may seem obvious, desktop computers are not ideal for those who are frequently mobile. Desktop computers have a reputation for being bulky and heavy, and even though that is becoming less true every year, there is some truth to it. Those who need to be near a computer at all times would most benefit from the freedom a laptop offers, though there is always the option of investing in both!

While desktop computers are typically better performing and lower in cost, it can be hard to not see the appeal in a computer that’s both ultra-thin and lightweight. Computers are wonderful tools when they work properly but can be incredibly frustrating and confusing when they don’t. Contact us here whenever you need fast and affordable computer repair services, we are highly experienced in repairing both desktop and laptop computers!

Boasting both versatility and portability, laptops remain a tried and true tool for those who travel regularly or work on the go. Of course, what kind of laptop one should shop for can vary from person to person. If you plan on picking up a laptop, knowing exactly what kind of use you plan to get out of it is never a bad idea.

Even with those considerations in mind, picking the right laptop can be tricky when you consider just how much variation exists on the market. Fortunately for those feeling a little overwhelmed, we have a short list of considerations buyers should stay on the lookout for when shopping. Read on for a few of the qualities we feel shoppers should consider before settling on their next portable computer!

Decide Between a Traditional and a 2-in-1 Laptop

One of the first things to consider before visiting your first store is whether or not you’re interested in a 2-in-1 laptop. 2-in-1s are hybrid devices that can freely switch between traditional laptop modes and tablet modes. Typically, this is either achievable through detachable screens or laptops capable of being bent back 360 degrees in order to change modes.

While these machines can surely bridge the gap for those unsure of whether or not they want to settle on a laptop or tablet, almost universally across the board, a machine that specializes in one or the other will perform more effectively. In the end, it boils down to how you plan on using the device. If you’re hoping for something a little stronger that can handle more intensive work, a laptop would be the right call. Others simply in need of a versatile device they can trust to browse the web when they’re away could find exactly what they need from a 2-in-1. 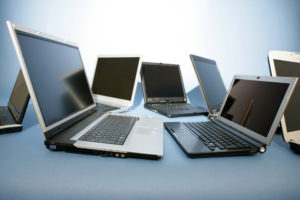 The size of your laptop may seem like a petty quality to hold with such importance; however, there’s no denying that different sized laptops each come with their own perks and drawbacks. For example, if you’re a student and plan on carrying around your laptop regularly through campus, a 13-14 inch model is probably your best bet as it offers the best ratio of portability to functionality. On the other hand, those who want a laptop they can keep at their desk with more processing power should consider something a little larger like a 17-18 inch model. 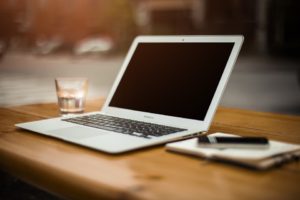 2-in-1 options and size may be important but, in the end, your laptop’s functionality boils down to its individual specs. This is where knowing what use you plan to get from your computer comes in handy because, once you do, you can start narrowing your search to laptops with the specs necessary to handle those tasks. Always pay special attention to a laptop’s processor, RAM, and, if you’re interested in gaming, graphics card. These components will have a direct impact on the speed your computer boasts when dealing with more intensive processes like gaming, rendering, or streaming. Once you know what you plan on using your laptop for, allocate more of your budget towards the components that lend themselves more to that task while scaling it back from those that don’t.

With so many ways to customize your laptop, finding the perfect model boils down to you firmly understanding what you’re looking for in a personal computer. Keep these three aspects in mind when narrowing your search and allocate your budget accordingly and you’ll find the perfect tool tailored towards your individual needs.